Ask us about our discounted med program for ED (Erectile Dysfunction)

Your cart is empty

Throughout our years in business, Triangle Compounding Pharmacy has been fortunate enough to make an impact on the lives of our customers. Below are just a few stories of exceptional people we have been able to help with our compounded medications. 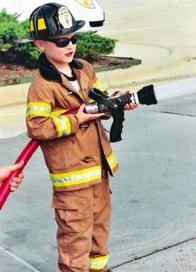 John-John’s favorite hat to wear is his firefighter’s hat. He is five and a fighter who has overcome some large obstacles in his young life. John-John was born with muscle hypotonia, or low muscle tone.

While John-John’s mom, Lori, was busy raising her family and coordinating the many therapists needed to help John-John overcome his illness, 6-month-old John-John fought off a series of illnesses back-to-back for two months. One of the viruses, a herpetic virus, caused young John-John to develop keratitis, a painful condition where the cornea becomes inflamed or ulcerated.

Lori recalls, “John-John was on the mend of his two months of illnesses and then all the sudden he woke up one morning, and he couldn’t open his eyes. He was very light sensitive, and he was screaming. He was only 16 month’s old and couldn’t tell us what was wrong.”

A Cornea Specialist diagnosed his condition. As a result of the keratitis, John-John developed permanent scarring on his cornea. Highly qualified and well-respected doctors worked together to develop a plan of care to prevent further damage of John-John’s eyes. This plan of care involves the use of Valtrex, a medication which must be compounded when used for children. John-John must take Valtrex twice every day for the rest of his life, in combination with an eye drop regimen.

Lori remembers first meeting Joe Cabaleiro of Triangle Compounding Pharmacy when she moved to the area. “Joe sat down and talked with me, and I said, ‘this is the recipe for John-John’s medicine, and this is our situation. Can you help us?’, and Joe said, ‘No problem.’ It was so assuring to have someone who could make the medication for John-John.”

To a five-year-old, taste matters — a lot. When a child has to take a specific medication every day, it has to taste good or the child won’t take it.

Triangle Compounding Pharmacy was up for the challenge of making a good tasting medicine for John-John. With 250 flavors to work with, it only took Joe and co-owner Danny Barnes about 8 batches to find a flavor that John-John would tolerate.

“That really touched my heart,” Lori shares, “that they were willing to find something for my child because this is a medication that is never going to go out of our life. Everybody at Triangle Compounding Pharmacy went through so much to find John-John a flavor that he would take.”

For John-John, Valtrex keeps his condition in submission better than any drug out there. He does have occasional outbreaks that could potentially further damage his eyes, which makes consistent use of his medication of utmost importance. 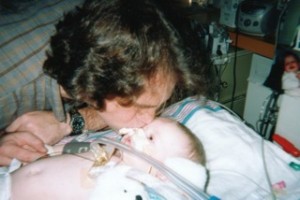 Arden was born healthy and happy and seemingly normal until at 5 ½ months of age she awoke with a cough. By that evening, she was on a ventilator in the intensive care unit. The cough had signaled a case of pneumonia which revealed, to everyone’s shock, that Arden had rare birth anomalies which included one lung and a greatly narrowed trachea. After an extensive surgery reconstructed her airway, she was on a ventilator for over 6 weeks and spent six months in an ICU. Arden returned home much different than she left. She returned home with a still healing and fragile airway, a tracheostomy and a G-tube (a surgically placed feeding tube in her abdomen).

Even though she was home from the hospital, she was still considered medically critical and was quarantined to her home for nearly two years. Arden is now a vivacious six-year-old. She no longer has a trach or G-tube and is a very strong and determined little girl.

During Arden’s lengthy recovery at home, her Mom and Dad relied on Triangle Compounding Pharmacy to help Arden through a very difficult period in her young life. Arden’s Dad, Byron, remembers, “Once at home, and under nursing care, with a compromised airway and immunities destroyed, Arden was very susceptible to infection. This often required special preparations of antibiotics, which could only be compounded. We found Triangle Compounding Pharmacy to help fulfill those needs.”

Arden used several medications provided by Triangle Compounding Pharmacy. “She needed specialized antibiotics to help her get rid of infections quickly.” Byron comments, “So, we were constantly juggling antibiotics.”

Arden’s Mom, Laurie, adds, “The Gentamicin she needed to fight off an infection came in little vials, and I had to use a syringe to draw the medicine out of the vials and squirt it in the medicine cup of the nebulizer. This sounded like an easy enough endeavor, except for the fact that I had a needle phobia.”

Joe Cabaleiro spent a lot of time with Laurie teaching her how to properly use a syringe, and he helped to halt Laurie’s fears. “I remember he would not let me leave without practicing how to draw the medicine out of the vial several times until he was sure that I was confident with the whole process.” Laurie adds, “When I left the pharmacy that day, I was totally confident.”

Byron remembers a less pleasant part of the journey, “A side effect of the antibiotics was that Arden would have liquid bowel movements. Several times, the ‘stuff’ would be so acidic, it would actually eat away at the skin on her bottom, which would put her in constant pain.” Laurie adds, “The pain was so severe that Arden would turn her lips completely blue during diaper changes.”

“We tried everything we could think of,” continues Byron, “Desitin, corn starch, none of it really helped. Then one day Joe told me he had this ‘Butt Cream’ (that was his name for it) that would take care of it. I remember the day he described how to use it; you almost literally had to use a putty knife to put it on, and it was impossible to clean off. But guess what? IT WORKED!” In just a day or so the sores would start to clear up, and everyone would be able to relax a bit. 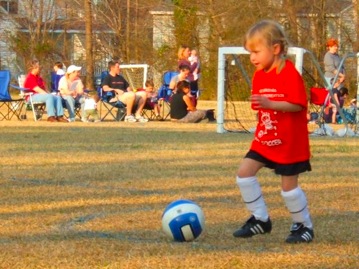 Arden has overcome many of her challenges and still enjoys a good game of soccer!

Arden’s parents are grateful to have the personalized support and care given to them by Triangle Compounding Pharmacy. “The people at Triangle Compounding Pharmacy are very knowledgeable; they think beyond the prescription in front them, to what else might help the patient, and they are extremely customer oriented and quickly became part of our family.” Byron adds as he walks out of his home after a hard day’s work to run around the yard and play with Arden and his family.

For most families, having a baby in their home is a time of whimsy and play. Parents often spend hours reliving their own childhood as they bond with their baby. For one North Carolina family, their newborn sent them on a journey through the medical field as they worked hard to help their child just to breathe.

Manage Cookie Consent
To provide the best experiences, we use technologies like cookies to store and/or access device information. Consenting to these technologies will allow us to process data such as browsing behavior or unique IDs on this site. Not consenting or withdrawing consent, may adversely affect certain features and functions.
Manage options Manage services Manage vendors Read more about these purposes
View preferences
{title} {title} {title}